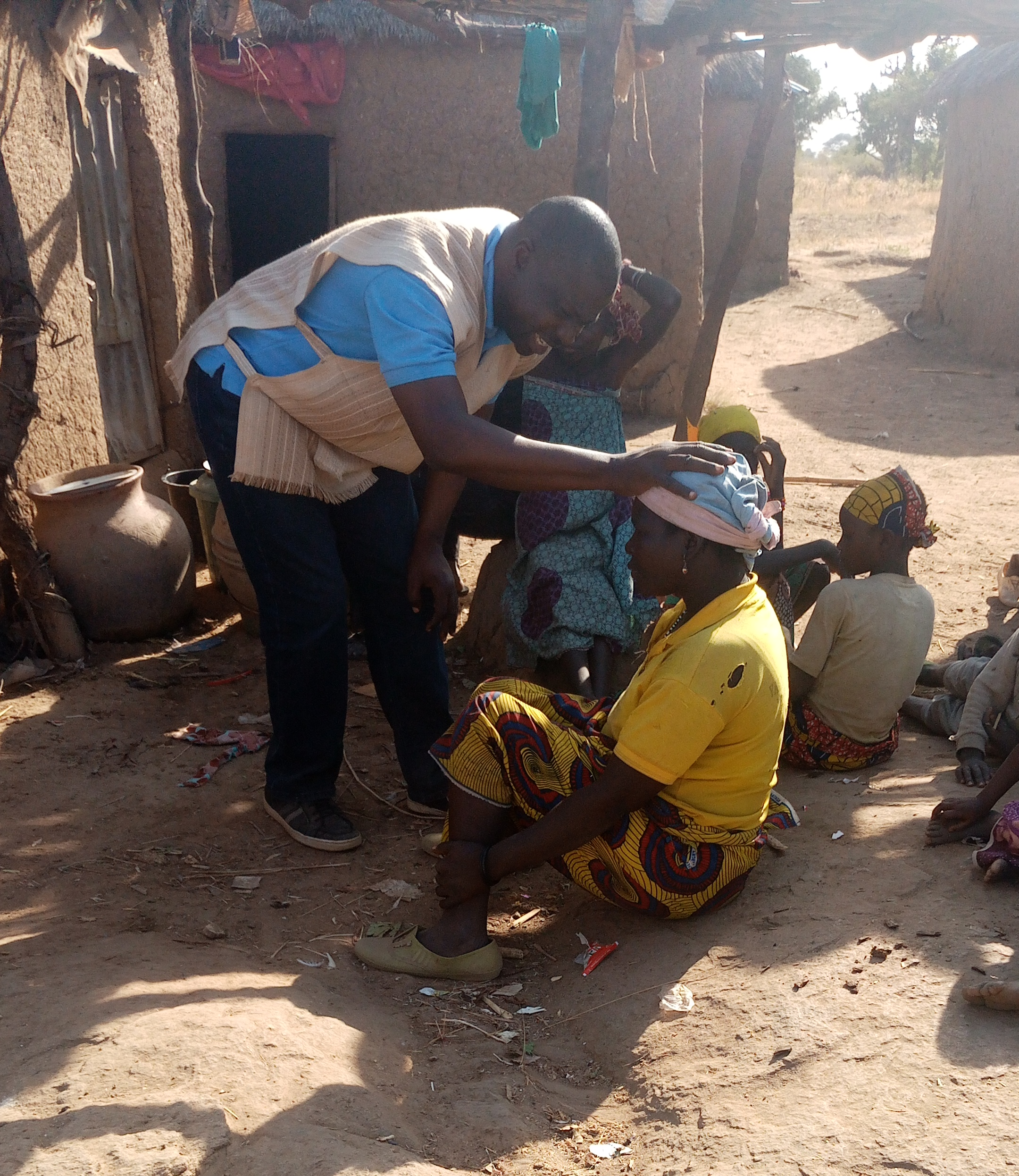 Mallam Musa Wanda Turaki is a Missionary among his people, the Miyawa people of Bauchi state. While addressing the HARVEST20 outreach team, he will conclude his information of distances between a location and another in Miyawa and Jimbunawa land as ‘’it is not far’’. When he would be asked, ‘’how far is not far?’’, he would say about two hours on foot or about five hours on foot! At this, the short term team will sigh with exasperation.  For a hardworking and rugged Missionary in love with his people, no distance is far to bring the Gospel of the Kingdom to his people.

The HARVEST20 short term Missions outreach among the Miyawa and Jimbunawa people of Bauchi state is a foray among a people harassed by the Devil but hungry for the Lord, they are indeed not far from the Kingdom.

The HARVEST20 short term Missions outreach among the Miyawa and Jimbunawa people of Bauchi state is a foray among a people harassed by the Devil but hungry for the Lord, they are indeed not far from the Kingdom. 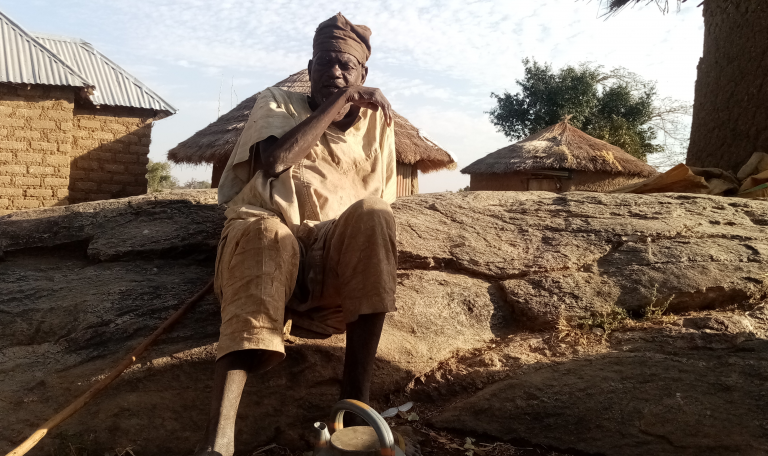 The 3rd in command in the Dodo priesthood of the Miyawa people. ’’We prefer Christianity to Islam’’ 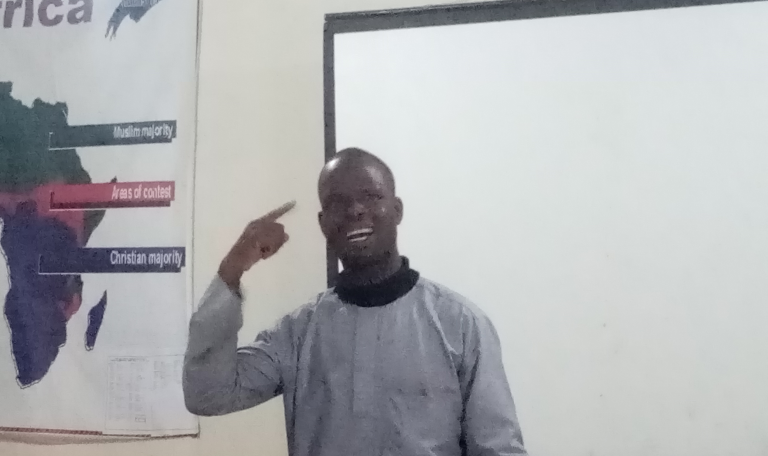 HARVEST20 short term Missions outreach was held from 10th to 20th December, 2020. The outreach comprised a time of training and orientation for the Short termers, journey and engagement of the unreached communities at their locations and concluded with a debriefing session of the team before they were released to return home.  For the participants, the experience was both transforming and impacting.

HARVEST20 started with two days of training in Missions and Discipleship with an orientation about short term Missions and the communities where the team will be visiting. The devotions were centred on ‘’ Basic attitudes for Missions advance’’ as Sacrifice and Zeal for God were considered. Topics on ‘’ The role of the Holy Spirit in Missions’’ and ‘’The place of Spiritual Warfare in Missions’’ were also considered. The highpoint of the training for the Short term team was the session on understanding Missions and the state of the harvest as the state of the unreached was explained to the team through video and documentary presentations of the sad state of our world. They understood that there is a difference between an unbeliever who has heard the Gospel but is unwilling to receive Christ and an unreached people who have not heard the Gospel before or have not heard or understood sufficiently enough to make a decision about Jesus! The training was concluded with a time of prayers and impartation for the team.

Miyawa people: The land of Dodo (Masquerade) and oppressive Islam

The HARVEST20 short term Missions outreach continued after the training with community engagement in Miyawa villages. Miya is the major town of the Miyawas but they are scattered in different farming communities in the hinterland. 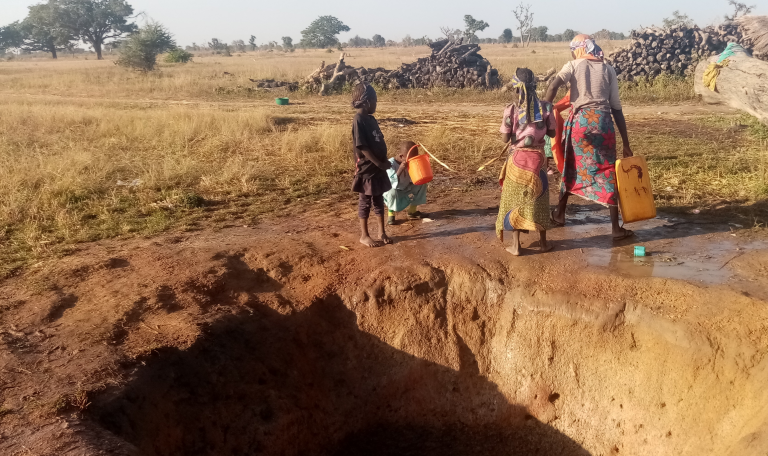 The pool of water drunk by communities in a radius of more than 5km. It also serves the cattle on international transit. Right: A boy drinking from the pool

The HARVEST20 team were able to minister among two communities of Kurmi Tamara and Kurmi Jojin. In Miyawa land, the major thrusts of engagement are prayers, film show evangelism and family engagement in the communities.

The contention for the faith of the Miyawa people is occult traditional practices and Islam. The Islamic caliphate in Nigeria is working strongly to impose Islam among them while their ancestral pagan worship would not let loose. It is between these two spiritual forces that the Missionaries are working to raise a church among the Miyawa.

Aside the spiritual stronghold of the enemy in Miyawa land, infrastructure and social amenities are non-existent in Miyawa land.  Open defecation is the order of the day as the available toilets are the large expanse of open field used for farming by the villagers. This disposes them to all sorts of diseases. The source and provision of water is very terrible. Kurmi Tamara is on the path of the international cattle grazing route that cuts across many countries from Guinea through Mali, Burkina Faso into Northern Nigeria down to the South. As such the shallow pools that the people drink from are also shared with the cattle in transit. As the dry season beckons, they are at the risk of another sanitation crisis!

Mallam Musa is the second born of one of the Sarkis (local Chief) in Miyawa land but the only one that has embraced Christianity. He was able to acquire an expansive piece of land to build a church but could only pay for half of the land, the HARVEST20 team assisted in helping to pay up for the land as the team looks up to God to help with the construction of manual water pumps to meet the water/sanitation needs of the teaming population in the jungle and also provision of about a dozen modern toilet facilities for the communities. The commitment of Mallam Musa is legendary as he traverses the length and breadth of Miyawa and Jimbunawa land preaching the Gospel and exercising pastoral care over Christian workers and Christians scattered across the land, however, he does not have any means of mobility! During the rainy season, he would have to wade through pools of water to reach his destination. Mallam Musa and his team need motorcycles urgently for their work!

The King of Jimbunawa: Living in a fortress of Crocodiles

The Jimbunawa and the Miyawa people are neighbours but their gods are different! Visiting the palace of the Jimbunawa king will reveal the spirits and forces 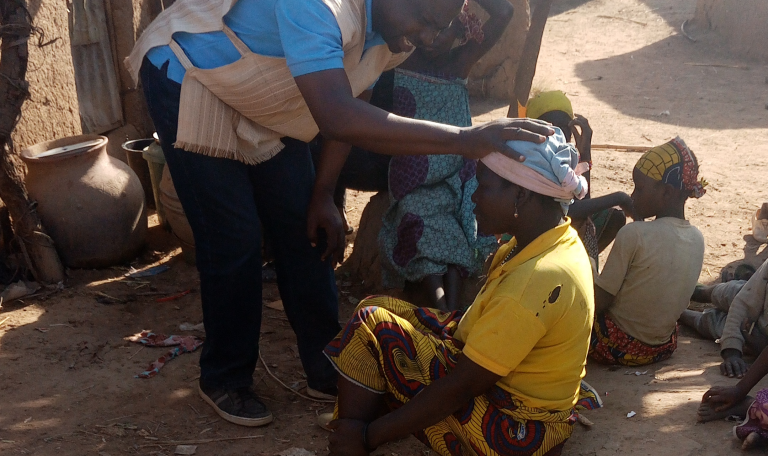 holding sway in their midst. At the entrance to the palace are about seven pools of crocodiles that form a semi-circular fortress.  It is a wonder to have crocodiles, an animal whose natural habitat is in tropical climate surviving in the desert! Such is the spiritual state of the Jimbunawa. Worse off is the fact that they are in league with Islam to resist Christianity.

When the team visited the king in his palace, it was an intense spiritual confrontation as he told them out rightly that they are not allowed to preach from house to house and they can only show the Gospel film inside the small church building, which happens to be the only church in the town, at the outskirt of the community. In spite of the opposition, they reached out to him with an olive branch and he eventually agreed that they pray for him. After this they had a prayer walk around the town specifically praying against all the Spiritual forces sustaining the stronghold of the crocodiles!

The Emir of Jimbunawa with one of his chiefs.

It is a major source of concern to observe the illiteracy level among these tribes and absence of government efforts to provide education or health services in these communities.  The only semblance of health centre in Jimbu town is referred to as a death centre by the villagers because they believe they get worse after visiting the clinic. They seldom see any health worker at the clinic. The only block of building being used for school does not have teachers. The children will only come in the morning and play and go home. It is even worse in the villages as there are no schools. The team’s initiative to respond to the need at the public school was subtly rejected by the Muslim education officer stationed in the town but there is a great prospect for the establishment of private schools to reach the large population of unschooled children. 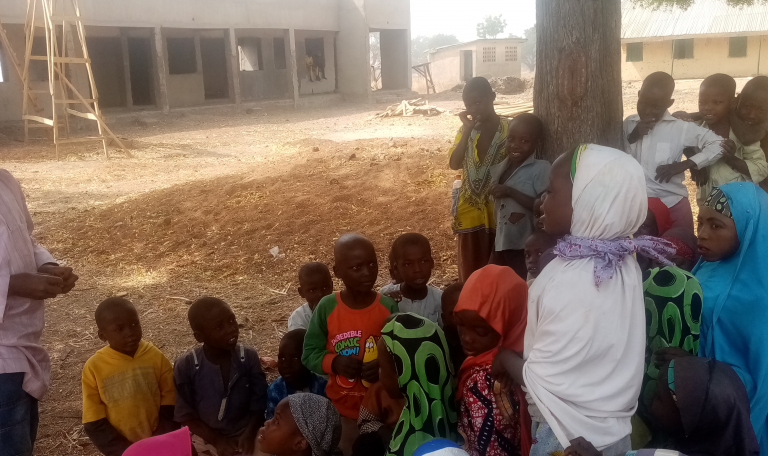 The youngest member of the HARVEST20 Team, 10 year old Agbolahan Olanihun, engaging the children. Nearly all of them have never been to school because there is no school or teacher in the only school in about 50 communities.

The cases of under aged marriage and child mothers are rampant. There are several teenagers who are already given out in marriage and have one or two children, the case of a child taking care of another child! There is an urgent need of educational and health intervention in the communities.

As HARVEST20 came to an end, the short termers were all blown with the depth of revelation in the hinterland and Missions frontline. They seriously yearned for the Church to prioritize outreach to the unreached people groups and very passionate to mobilize more youth for future HARVEST outreach.